(an excerpt from Doubts)

The contemporary German philosopher Peter Sloterdijk defines “cynicism” as enlightened false consciousness. It is what results when we know all too well our own weaknesses and limitations, and our own involvement in dastardly practices, but then find ourselves having to go on with the business of life nonetheless. We know better than to take our own pretensions to knowledge seriously; and yet we have to pretend to take them at least somewhat seriously, just in order to do the things we find ourselves having to do. It requires a bit of double-think, or a regimentation of layers in the soul: at one level we care, and at another we don’t. 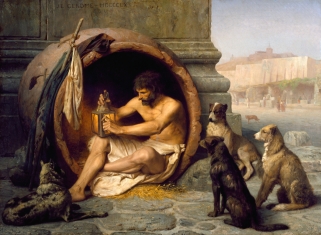 Lifestyle of a cynic

According to this criterion, David Hume was a cynic, but he certainly was not troubled by it. In the 18th century, perhaps he could believe that his literary efforts, and his aim to cultivate sensibility and good judgment in his readers, were innocent of any complicity in the larger doings of his culture. But now we are acutely aware of the dark side of the Enlightenment. Its philosophical authors celebrated human freedom while providing a cover story for colonial oppression and subjugation. Scientists strove mightily for a knowledge of nature while industrialists destroyed nature through forge and furnace. Its politicians aspired to democracy while creating wage slaves. The Enlightenment, it seems now, was a theater of false promises at best and a crucible of cruel mendacity at worst. All this makes it harder to find any peace of mind in cynicism. We know it is an illusion to think we can insulate ourselves from larger injustices. But it is an illusion we have to accept if we are to “get on with our work.” As Sloterdijk observes, “To be intelligent and still perform one’s work, that is unhappy consciousness in its modernized form, afflicted with enlightenment. Such consciousness cannot be dumb and trust again; innocence cannot be regained.”

Let me try to make this slightly less cloudy. Any sort of intellectual movement like the Enlightenment can take place only in societies of abundant wealth and resources. As it happens on Earth, societies gain that abundance only through some sort of exploitation – colonial expansion, slavery, and wage slavery. So, if you are a brilliant proponent of Enlightenment ideals – the dignity of all human beings, the tendency of the culture toward knowledge and justice, representative democracy, and so on – your very existence as an intellectual requires the negation of those ideals. To the extent you take those ideals seriously, you need to forget about those preconditions; to the extent you take note of those preconditions, it is hard to take seriously those ideals. And in short order, you are made a cynic, “afflicted with enlightenment.”

Cynicism is skepticism with a particular focus: it is a skepticism about the moral dimension of reason. Its target is not really that we can gain an understanding and mastery of the world – evidently, with our compasses and printing presses and gunpowder, we can. Instead, the cynic’s target is that the understanding we gain will make us better people. It will not; in fact, the evidence suggests that our enlightened understanding is supported through oppression, and equips us to extend that oppression even further.

This worry over the value of civilized ideals was recognized even at the height of the Enlightenment. In his 1755 essay meant to explain how it has come to pass that men possess unequal shares of power and prestige, Jean-Jacques Rousseau argued that civilization, with its hollow ideals and absurd practices, only severs us from more natural and gentle ways of being. He imagines the earliest, least-civilized human beings “wandering up and down the forests, without industry, without speech, and without home, an equal stranger to war and to all ties, neither standing in need of his fellow-creatures nor having any desire to hurt them, and perhaps even not distinguishing them one from another.” But once property is claimed, and there is yours and mine, and the straitjacket of civil society is wrapped around us, we begin to live and compete in a world that demands sacrifice and cruelty, where success is determined by fighting for one’s place in a social hierarchy:

Civilized man, on the other hand, is always moving, sweating, toiling and racking his brains to find still more laborious occupations: he goes on in drudgery to his last moment, and even seeks death to put himself in a position to live, or renounces life to acquire immortality. He pays his court to men in power, whom he hates, and to the wealthy, whom he despises; he stops at nothing to have the honor of serving them; he is not ashamed to value himself on his own meanness and their protection; and, proud of his slavery, he speaks with disdain of those, who have not the honor of sharing it.

Civilization means having to honor those whom you despise, working yourself to death for the honor of having done so, and priding yourself on being better – “more sophisticated” – than anyone refusing to live in such a madhouse. Ask anyone stalled in a 21st-century traffic jam whether there is not truth in these words.

But the most profound voice of cynicism belonged to Fyodor Dostoyevsky. In his Notes from Underground (which might be translated alternatively as “Notes from Beneath the Floorboards”) he exposes the frightful human condition that the Enlightenment tries to suppress. Even Rousseau, one might argue, is guilty of painting too flattering a portrait of human society – for even though society itself warps our values and behaviors in stultifying, unnatural ways, down beneath is a natural human being, one who wants to wander the forests and live in primitive harmony within a world owned by no one. In short, Rousseau retains a hopeful view of us, at least in our natural condition. But when Dostoyevsky’s man beneath the floorboards looks within himself, he finds nothing but ridiculousness, violence, and disgust for everything that is called “noble.” We may try to deceive ourselves by wrapping civilizing straitjackets around us, but beneath it all we are still reckless animals that sometimes act only out of spite:

There are continually turning up in life moral and rational persons, sages and lovers of humanity who make it their object to live all their lives as morally and rationally as possible, to be, so to speak, a light to their neighbors simply in order to show them that it is possible to live morally and rationally in this world. And yet we all know that those very people sooner or later have been false to themselves, playing some queer trick, often a most unseemly one. Now I ask you: what can be expected of man since he is a being endowed with strange qualities? Shower upon him every earthly blessing, drown him in a sea of happiness, so that nothing but bubbles of bliss can be seen on the surface; give him economic prosperity, such that he should have nothing else to do but sleep, eat cakes and busy himself with the continuation of his species, and even then out of sheer ingratitude, sheer spite, man would play you some nasty trick. He would even risk his cakes and would deliberately desire the most fatal rubbish, the most uneconomical absurdity, simply to introduce into all this positive good sense his fatal fantastic element. It is just his fantastic dreams, his vulgar folly that he will desire to retain, simply in order to prove to himself – as though that were so necessary – that men still are men and not the keys of a piano, which the laws of nature threaten to control so completely that soon one will be able to desire nothing but by the calendar.

Dostoyevsky’s rebellion is against the confidence that we can understand ourselves, diagnose our ills and weaknesses, and find for ourselves a happier mode of existence. But the human equation cannot be balanced; there is always some unruly part that will rebel even against cakes and money and sex, if only for the sake of asserting to an indifferent universe that we shall not be fit into a timetable. It doesn’t make sense, does it? That’s the point. We don’t make sense; and the glittering ornaments of civilization are only means to distract ourselves from this fact. A day spent in court, watching the sad parade of victims and perpetrators, or even a day spent in an urban train station, will drive this point home more effectively than any argument can.

The underground man finds it impossible to live with his enlightened false consciousness. He deliberately makes an obnoxious fool of himself at a drinking party, just to embarrass himself and the others. And at a point in the story when it seems that a genuine human virtue has been found – when he makes a heartfelt connection with a prostitute, pouring his heart out to her, and they make love – he cannot resist cruelly recalling the young woman to her demeaned position by thrusting money into her hands. There is no nobility in us that can save us from what we are, since a core part of us rebels against such pretensions to nobility. We are broken in ways no one can fix.

Curious about the ways humans use their minds and hearts to distract themselves from the meaninglessness of life.
View all posts by Huenemann →
This entry was posted in Books, Historical episodes, Meanings of life / death / social & moral stuff, Stacks of Books. Bookmark the permalink.