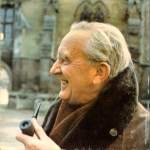 (from a webpage for a class looking at Tolkien and medieval poetry: http://www.siue.edu/~ejoy/is399syllabusSP08.htm)

Yesterday my family and I watched all three Lord of the Rings movies, pretty much end to end, though taking necessary breaks for eating walking, and discussing. The event was a a bit like an event a friend of mine used to host, where a small group listened to Wagner’s Ring cycle over a weekend, with breaks to feed, drink, and discuss. We don’t watch a lot of movies, so watching nine hours’ worth in a day was uncomfortable for us, but I’m glad we did it, and we had some good discussions over it. I think both Tolkien’s work and Jackson’s treatment of it are monumental achievements – in the same class as Wagner’s, say I, though I welcome arguments to the contrary.

It’s clear that the overarching theme of the work is “Life can be good and true (the Shire); but one has to be brave and vigilant in resisting the conquest of greed (Sauron) and inhumanity (Isengard and Mordor); and one must always have hope for redemption, even in severely tainted cases (Gollum).” Or that’s one expression of the theme, anyway. I respect the theme, and am even ready to sign the papers.

But here’s one reservation I would like to explore. The Shire represents all that is good and noble – the human life as it would be lived were it not for the eruptions of evil. But would you like to live there? A weekend, or maybe a decade, sure, but it is a pretty narrow and homogeneous place. I can’t imagine an Orc family settling in, or some lesbian Elves. It’s only a place for little white people. I guess the alternative groups need to find their own homogeneous communities, and live the life that is natural to them. So much for multiculturalism, or cosmopolitanism (which isn’t a surprise, given Tolkien’s own views). I imagine that Kleiner’s upcoming course on Tolkien and Lewis will raise this issue at some point, perhaps connecting it with MacIntyre’s After Virtue.

Of course, even Bilbo and Frodo find the Shire too confining, which is what pushes them out the door and into adventure. So maybe a better cluster of questions about the Shire has less to do with what a community should look like and more to do with the way an individual relates to tradition and community. Frodo and Sam need the Shire as a touchstone to who they are, where they’re from, even if they are not going back or find themselves unable to return. They take turns reminding one another of the Shire in their darkest hours, when they begin to despair or lose direction. One might well ask whether they could have completed the quest if they hadn’t had the Shire at their origin; I think they couldn’t have.

The LotR story is also refreshing in its treatment of villains. Yes, Sauron dies and thousands of orcs are slaughtered. But several are spared: Wormtongue, Saruman, and Denethor (who dies either accidentally or by suicide). It says something about us that our movies neglect to kill a baddie only when there’s the promise for a sequel. Gollum, of course, is spared many times, usually because Frodo needs to be able to hope for Gollum’s recovery, and because he is heeding Gandalf’s advice about not being so eager in determining who should live and who should die. There is some good humanity in that.

I have enjoyed thinking through these these and questions, but I don’t think I’ll need to see these films again for a good long while. And my family seems happy to hear it!

Curious about the ways humans use their minds and hearts to distract themselves from the meaninglessness of life.
View all posts by Huenemann →
This entry was posted in Books, Meanings of life / death / social & moral stuff. Bookmark the permalink.

11 Responses to Reflections on Tolkien