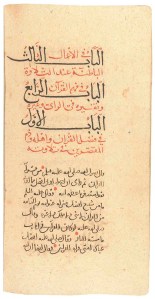 Al-Ghazali (1058-1111) was a Persian mystic philosopher, and wrote the Deliverance from Error as a kind of intellectual autobiography, while at the same time an argument for sufism. (A student gave me the book after sitting through my epistemology class, probably thinking (a) I’d like it, and (b) I could use the help.) Its similarities to Descartes’s Meditations are striking. Al-Ghazali is writing to a friend, recounting his spiritual journey, which began with “a thirst for grasping the real meaning of things.” He soon realizes he must understand the nature of knowledge. At first he feels sure only self-evident truths and the reports of his senses; but he soon finds himself able to doubt even these, as he considers that he might be in a state like a dream. His soul tells him:

“Don’t you see that when you are asleep you believe certain things and imagine certain circumstances and believe they are fixed and lasting and entertain no doubts about that being their status? Then you wake up and know that all your imaginings and beliefs were groundless and unsubstantial. So while everything you believe through sensation or intellection in your waking state may be true in relation to that state, what assurance have you that you may not suddenly experience a state which would have the same relation to your waking state as the latter has to your dreaming, and your waking state would be dreaming in relation to that new and further state?”

If  Descartes had put his doubt this carefully, centuries of undergraduate philosophy professors would have had greater success in making that doubt compelling! Actually: maybe too compelling. For how does one answer the doubt that one’s own powers of conception, the lining of conceivability, might be askew? Descartes’s skeptical scenario is only meant to cast doubt on sensations, for then his powers of “intellection” can save the day. Al-Ghazali lumps them together in his “same relation to a dream state” scenario, and there’s no way out of that, except for a lifeline thrown by an external source. This is exactly what al-Ghazali recounts: he is in skeptical despair for about two months before he is cured of this illness – “My soul regained its health and equilibrium and once again I accepted the self-evident data of reason and relied on them with safety and certainty. But that was not achieved by constructing a proof or putting together an argument. On the contrary, it was the effect of a light which God Most High cast into my breast. And that light is the key to most knowledge.”

This too is echoed by Descartes, in a way. His skepticism is cured or answered by the light of nature, which reveals to him certain truths which, it turns out, render the deceiving-demon scenario, and finally the dreaming scenario, inconceivable after all. But does Descartes take the same attitude as al-Ghazali – as that of a patient acted upon by a higher doctor? Or is Descartes’s remedy more of a self-cure? It seems to me something of both: our natural light, our reason, cures us of skepticism, but it is able to do so only because God invests us with an innate ability to discern the structure God imposes on the cosmos. It’s self-help with prescription medication.

While reading al-Ghazali I also read David Deutsch’s The Beginning of Infinity. Early on, Deutsch argues against the sort of doubt al-Ghazali expresses, labeling it as a “parochial” view of human reason. By this Deutsch means that we are able to offer the kinds of explanations we do, and enjoy the sort of technological success we have, precisely because our intellect grasps fundamental patterns and principles of nature. To give in to the doubt that “maybe, somehow, in a way we cannot possibly imagine, the world is other than we suppose” is to give in to utterly unwarranted, superstitious, magical thinking. Deutsch sees this sort of doubt as an outgrowth of what he calls “the principle of mediocrity,” or a principle which says that there is nothing especially significant about human beings. Posh, says Deutsch: our ability to reason and offer explanations is very significant, and we should not be afraid of it. We stand at the beginning of infinity … [cue Star Trek music]

Al-Ghazali and Deutsch sit at opposite ends of the Enlightenment, which was fundamentally a transition from passive to active voice. Autonomy, for al-Ghazali, manifested itself as a kind of illness – a lacking loneliness, or pointlessness. For Deutsch (and, of course, Kant and Hegel before him), autonomy was a mark of liberation, a graduation from self-incurred tutelage to the world of being a master. But the Enlightenment thinkers see reason at our core, and our liberation from external saviors means the freedom to exercise reason. Once we entertain a doubt as to whether reason constitutes our core (and hello, Nietzsche!), then that “liberation” begins to resemble the illness al-Ghazali  found it to be, and we start to seek outside aid. The landscape of the intellect changes; but the need for some sort of salvation, either from within or without, does not.

Curious about the ways humans use their minds and hearts to distract themselves from the meaninglessness of life.
View all posts by Huenemann →
This entry was posted in Books, Historical episodes, Metaphysical musings. Bookmark the permalink.