Joseph Glanvill (1636-1680) may have been the first popularizer of modern science. Educated at Oxford, and one of the earliest fellows of the Royal Society, Glanvill published works that railed against rigid dogmatism and promoted open-minded scientific inquiry. He believed that the patient application of reason and experience, expressed in clear and unambiguous prose, would lift his troubled society above religious squabbles and into an enlightened age. 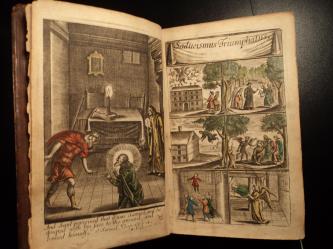 He also believed in witches. In his Saducismus Triumphatus, or A Blow at Modern Sadducism in Some Philosophical Considerations About Witchcraft (1668), Glanvill argued that some of his more radical contemporaries were wrong to believe they could casually brush aside belief in powerful, invisible forces. Deny evil spirits, and before you know it you will be denying the existence of an ethereal soul and its afterlife – landing in Sadducism, which provides insufficient incentive for upright living.

Glanvill begins his treatise by noting that there have been thousands upon thousands of eyewitness accounts of witchcraft, many of them containing stories so thoroughly bizarre that they could not possibly be made up. Moreover, he continues, microscopes are showing us that the world is jam-packed with life, in the smallest parts of air and sea, and no one is in any position to make claims about what sorts of living forms can or cannot exist. If, as Glanvill and his Cambridge Platonist friends believed, the human soul is composed of a very light and ethereal form of matter, then there surely might be forms of spiritual life inhabiting the wide spaces our world that answer to our descriptions of demons, devils, and witches. It would be unscientific to say otherwise. Moreover, as we learn more about the surprising nature of the mechanical and chemical world, we shall begin to see that the seemingly magical powers of witches turn out to be perfectly natural.

Glanvill offered his own tentative account of the commerce between witches and their familiars. A familiar, you may recall, is an animal (like a black cat) that obeys the witch’s commands and can even serve as a surrogate pair of eyes and ears. It was further believed that the familiars themselves housed demonic spirits which exercised powers back upon the witches, in a kind of witchy symbiosis. The familiars “synced” with their respective witches by attaching their mouths to some part of the witch and sucking, leaving behind a telltale “witch’s mark.” Glanvill’s hypothesis was that

the Familiar doth not only suck the witch, but in the action infuseth some poysonous ferment into her, which gives her imagination and spirits a magical tincture, whereby they become mischievously influential…. Now that the imagination hath a mighty power in operation is seen in the just now mention’d signatures and diseases it causeth; and that the fancy is modified by the qualities of the blood and spirits, is too evident to need proof. Which things supposed, ‘tis plain to conceive, that the evil spirit having breath’d some vile vapour into the body of the witch, it may taint her blood and spirits with a noxious quality….

So it is fundamentally a biochemical infusion of evilness, a demonic analogue to STDs. Glanvill’s hypothesis is more or less in keeping with the emerging accounts of infectious diseases, just applied a bit further afield than we might expect.

This observation makes it less surprising that Glanvill had quite an influence upon Cotton Mather, who used his work to defend the Salem witchcraft trials, and was at the same time an early proponent of using inoculations to help prevent the spread of smallpox. That’s the way a science develops: a myopic inching forward, making use of what seems to work coupled together with whatever wacky theory we happen to have on hand. Unfortunately, in this case and others, this theoretical jury rigging can incur real human costs, as the ghastly hangings at Salem testify.