Reading Kevin Kelly, The Inevitable: Understanding the 12 Technological Forces That Will Shape Our Future (Viking, 2016).

Kelly is one of the founding editors of Wired, and this book is about the promise of emerging technologies to, well, shape our future. A paragraph early in the book exhibits its general vibe:

So, the truth: Right now, today, in 2016 is the best time to start up. There has never been a better day in the history of the world to invent something. There has never been a better time with more opportunities, more openings, lower barriers, higher benefit/risk ratios, better returns, greater upside than now. Right now, this minute. This is the moment that folks in the future will look back at and say, “Oh, to have been alive and well back then!”

I know: sort of exhausting, all that wide-eyed enthusiasm. Kelly’s book is big on new technological opportunities, and short on any informed historical consciousness, let alone any awareness of the ever-widening gap between the rich people poking at their jeejahs and the poor people hunting for potable water. It is full-on with bubble cars, jet packs, and machines that go “ping.”

But, for all that, it is an insightful book, and he makes a compelling case for some bright potential. The future he imagines is relentlessly Heraclitean, with endless opportunities for becoming, cognifying, flowing, screening, accessing, sharing, filtering, remixing, interacting, tracking, questioning, and beginning (these, in fact, are the chapter titles). If all goes to plan, we won’t be able to step anywhere twice, since by then it will have been uploaded into some cloud or other. (Speaking of which, where is our Aristophanes, with all this talk of clouds?) It’s hard for me not to play the part of the cynic, but at the same time Kelly is surely right that – at least with regard to interconnectedness and information – our time is unprecedented, and some tremendously cool things should be happening in the near future.

And, along with them, some pretty ghastly things. At one point Kelly describes computers that will gaze back upon us, watching our eyes and faces, and making adjustments for what we’re feeling – speed up boring movies, divert us to more entertaining images, etc. I can only hope there will be big “DISABLE” buttons. But even then, one wonders about the impact of such paternalist techs on broader populations, and one shudders. Is it too old-fogey of me to believe that some of the most rewarding lessons come along with being bored, uncomfortable, offended, incredulous? The problem with having super-smart machines tailoring our realities according to our wishes is that we, for the most part, wish like idiots.

Technology changes; human problems respond in Darwinian fashion, mutating and morphing into new ones, adapted to the new environment. Tech utopias are just as “nowhere” as old-fashioned utopias. But technology does bring real changes, and many of them are quite good – consider mortality rates, medicine, policy planning, and so on. The living conditions among the non-poor are better than they’ve ever been, by any objective measure, and the percentage of those of us who are poor is the lowest it’s been in at least two centuries – and probably much longer. For all this, we have technology to thank, in large part. Once our human problems advance beyond the stage of “trying to reach adulthood without dying from disease, starvation, or butchery,” we’re in a pretty good spot, despite the cavils of the philosophers. Trying to deal with the spiritual impact of the advances of technology is, by definition, a first-world problem.

I’ll grant, though, that calling the advance of technology a “first-world problem” doesn’t turn it into nothing. Some advances in technology bring rather sizable problems in their wake – consider the enormous human cost of the industrial revolution. That cost was eventually reduced, but only through the resistance of unions and both violent and political action. In this way, technological advance has to be shaped by human needs, desires, and preferences. A small-scale and more recent example of this was the failed introduction of Google Glass. 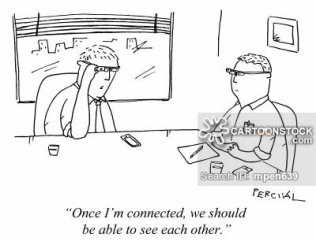 By Matt Percival, from Cartoonstock.com

Kelly mentions this failure in passing, and optimistically thinks the public hatred of the thing was only a matter of clunky design. But I don’t think that was the problem; if anything, it was the opposite. The problem was that using the thing violated a social space: people hated the idea of other people looking as if they were in a public space – standing in line, looking out a window – while in fact immersed in web activity. When you are staring at a glowing screen, I know what you’re doing; when you’re google-glassing, I’m liable to make a mistake, and that’s just irritating. You’re not following public conventions, and I feel like ripping that stupid thing off your stupid face. (Sorry; got a little out of hand there.) Maybe conventions about the social space will change, but maybe they won’t, and the idea of Google Glass will just go to the grave as a seemingly great idea that for whatever reason just didn’t take.

This is the largest consideration missing from Kelly’s book – the friction of tech rubbing against human needs. He seems to think technology is an obedient genie, granting our every wish. Of course, the relationship is much trickier than that, and it’s not always a happy one. The wisdom in tech advance is never greater than our own wisdom, which is never all that great. Technology, we might say, is a genie with a drunken master.

Curious about the ways humans use their minds and hearts to distract themselves from the meaninglessness of life.
View all posts by Huenemann →
This entry was posted in Books, Machines / gadgets / technology / games. Bookmark the permalink.