Trying to become what you is

I was in Seattle over this past weekend, and anyone walking the downtown streets could not fail to notice that about 1 in 10 people were dressed like Japanese manga characters. 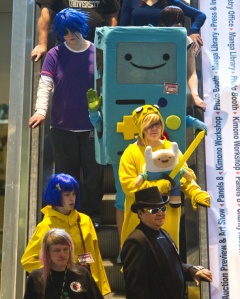 (from The Seattle Times)

It was “Sakura Con 2012”, where hundreds of people dress up and share their enthusiasm for fantasy. It was fun to see their costumes and to imagine what a thrill it was for them to meet one another and dedicate all their waking hours to satiating their desire to live in a happy fantasy world (of which I know practically nothing).

The astute observer would also have noticed that perhaps 1 in 100 people in the streets were dressed as philosophers. It turns out it was the Pacific Division meeting of the American Philosophical Association, where hundreds of scholars gather to share their enthusiasm for a world of problems, theses, counterexamples, objections, and historical figures. It was fun to hear their boisterous voices and to imagine what a thrill it was for them to meet one another and dedicate all their waking hours to satiating their desire to live in a happy fantasy world where the relentless pursuit of rational argumentation actually gets us somewhere. 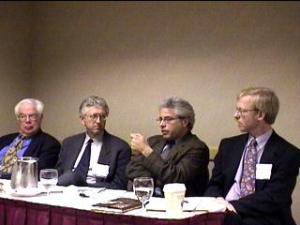 I know a bit more about this world, as I was one of the people dressed as a philosopher and wearing a name badge. I experienced the thrill of good, heady conversation about naturalism in Hume and Nietzsche, and met some very good people. But at these things I always feel a bit out of place. (Details here.) I never have been any good at patiently working through the precise and involved arguments prized by professional philosophers, and have been more of a big picture guy, with an honest but somewhat shallow approach. So I play around the edges, catching talks here and there that grab my interest, and making modest contributions where I can.

I hope it’s clear that I don’t mean this as any sort of self-depreciation or false modesty. So far as I can see, youth means imagining yourself to be someone you’re not, and old age is remembering who you were, and if we’re lucky there is a spot in the middle where you just try to be who you are, as much as circumstances allow. I’m good with that.

I did run into a veritable philosopher outside the hotel. He was a homeless guy named “Gary” who sang a song for me for some money, and then we had the chance to talk for a little bit. He was a very intelligent and well-spoken guy, who writes a poem everyday. One he recited to me described the self as fractured into several components – “Me, Myself, and I” – and he said that the business of life is in the effort to try to keep these components from actually meeting one another. “Our moods do not believe in one another,” as Emerson said, and Gary agreed. I was impressed by how composed and happy this man was, and how other people from the streets greeted him and how happy they were to see one another. Gary confided in me what he regards as the wisest thing ever said by a nonphilosopher: “I yam what I yam and that’s all that I yam.” Amen, brother. But it’s fun to visit these other places, and these multiple selves, from time to time.

Curious about the ways humans use their minds and hearts to distract themselves from the meaninglessness of life.
View all posts by Huenemann →
This entry was posted in Items of the academy / learning, Meanings of life / death / social & moral stuff, This & that in the life of CH. Bookmark the permalink.