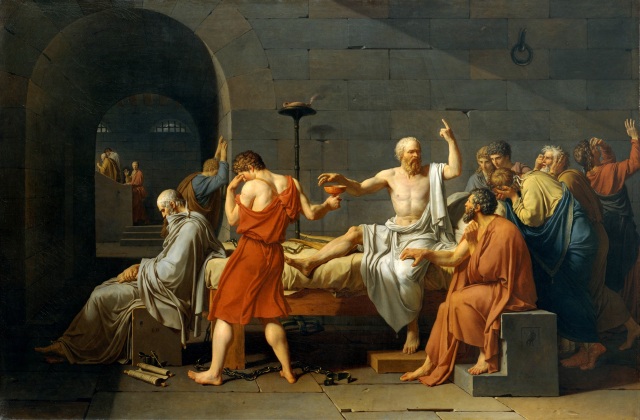 Jacques-Louis David, The Death of Socrates

The Phaedo concerns one of the most powerful ideas a human being can encounter: the idea of one’s own nonexistence. Socrates is about to die. Any of us in his situation would take seriously the possibility that death is really death, meaning that when one dies, nothing survives. There is no afterlife, no heaven, no hell, not even a black void in which one is conscious of the fact of no longer existing. For in real death there is no awareness at all. It is nothing. To many of us that is a frightening thought – that our participation in the universe comes to an end.

What view does Socrates take? He seems serenely confident of an afterlife. He presents several arguments – including an argument based on the notion that change is always from one opposite to another (so life leads to death leads to life, and so on), an argument based on his theory of recollection, and an argument based on the notion that the essence of the soul is Livingness, so it can never Die. He seems utterly convinced by these arguments. But at the same time, we should think about how this dialogue is set up, and how it begins and ends. The dialogue is in fact between two men, Echecrates and Phaedo. Phaedo is recounting Socrates’s death scene to Echecrates. Also, it is noteworthy that in the dialogue (which of course is really by Plato) the point that Plato was not present at the death is made explicit. So we ask ourselves: why would Plato want to flag the fact that he wasn’t there, and also make the dialogue not “live”, but as recounted by Phaedo to his friend Echecrates? Is this perhaps Plato’s way of telling us that the dialogue is purely made up, and not an attempt to convey what really happened?

Also, we should think about what Socrates says at the beginning and end. Socrates explains that he has been writing poetry, since he had a dream telling him to do so. And to be a poet, he says, one must compose fables [61b]. Then follows the bulk of the dialogue, which presents arguments for the afterlife and about the nature of the soul. Then, toward the end, Socrates offers a lengthy account of the geography of the earth, culminating in an account of the region surrounding the pit of Tartarus. This is the region where souls end up upon death, and Socrates describes what happens to them. Those who have become real philosophers end up in places too beautiful to describe (and this is why you should all become philosophy majors); others are punished until they are purified; and other irredeemable souls are cast into the pit of Tartarus.

Just after this account, Socrates admits that “no sensible man would insist that these things are as I have described them” [114d]. But he thinks it is a nice story to believe, and believing it will help to make us noble. A page later, when Crito asks Socrates how he would like to be buried, Socrates is disappointed by the question. For if what he has been saying is right, then he will never be buried; only his body will, which is not him. “But it seems,” Socrates says, “that I have said all this to him [Crito] in vain in an attempt to reassure you and myself too” [115d]. He recommends that everyone present should pledge and act as if Socrates lives on after death, and they should be of good cheer, so that Crito is not overcome by grief at the funeral. All this should make us wonder how confident Socrates really is about an afterlife. Perhaps he is just making up stories so that his companions, and he himself, will not despair.

Plato has a complicated relation to poetry, drama, and fables. We know that, early in his life, he at least considered becoming a dramatist. In many Platonic dialogues, poets and playwrights are heavily criticized because they are practicing their craft without taking into account whether their dramatic works are making their listeners stronger and better human beings. In the Republic, Plato’s longest and most famous dialogue, the ideal political state uses drama as government propaganda to inspire the populace to live virtuous lives. So, overall, Plato seems to think that drama is effective at shaping human behavior, even when the substance of the drama is all fiction. What’s strange in the Phaedo is that Socrates seems to be employing a fable to get other philosophers, his friends, to remain optimistic and virtuous in the face of their friend’s execution. Typically this sort of trick shouldn’t work on a true philosopher, who is supposed to love truth and know better. Socrates even seems to be trying this trick on himself, trying to reassure himself in order to face death bravely.

In the dialogue, Socrates also makes the claim that philosophy is a kind of training or preparation for death. When we connect this claim to the setting of the dialogue, we will naturally ask how Socrates himself prepares for death. He is astonishingly good-natured and confident about it. He sends away his wife and children because they are crying and grief-stricken. They are bringing the party down. He engages with his friends in spirited dialogue, he tries to cheer them up, and he takes a bath (so his corpse won’t need washing). Then he drinks the hemlock as soon as it’s offered, even a few hours earlier than necessary; he walks around so the poison will do its work more effectively, and finally Socrates lays down and dies. We could say he lives his life in full swing right to the end, without any concern about what does or doesn’t follow upon death. Is this perhaps how Plato thought we should face death? Settle our accounts, and when the time comes, boldly charge right in?

Perhaps Plato distances himself from the events of the dialogue because he wants us to pay less attention to what is said, and more attention to what gets done. Whatever Socrates believed, he believed it all the way through to the end, with no doubt and no fear. Plato might be saying that is how a philosopher lives, and dies.

Curious about the ways humans use their minds and hearts to distract themselves from the meaninglessness of life.
View all posts by Huenemann →
This entry was posted in Historical episodes, Meanings of life / death / social & moral stuff. Bookmark the permalink.