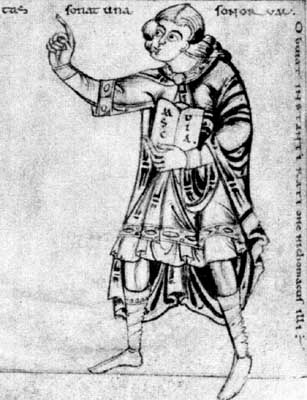 Nicomachus’s Introduction to Arithmetic is not merely about numbers. It is a treatise aimed at providing a mathematical metaphysics for all entities of any quantity or size whatsoever.

It is said that Plato had a sign above the entryway to his academy: “Let no one enter who is ignorant of mathematics”. Nicomachus (c. 60-120 c.e.) shows us why the sign should have been there. He begins the work by offering a fundamental distinction between what is continuous (magnitude) and what is discrete (multitude). I take it that this is meant to encompass all existent things: either they are unities, or they are not. But when we try to think through these basic concepts themselves, we encounter the infinite, he claims, and there can be no science of what has no limits. Placing limits on magnitude and multitude yields size and quantity, and arithmetic is the most fundamental science of them.

The great majority of Nicomachus’s work is an examination of the basic properties of numbers (their evenness or oddness), the relations that emerge from these properties (divisibility and so on), and the classifications of numbers based on their relations and properties (such as whether the sum of their factors is equal to them, in which case they are “perfect”). He uncovers marvelous harmonies and elegant structures within the field of numbers, and in the second part of the work he shows how the basic elements of geometry (such as dimensions, shapes, and solids) arise out of arithmetic.

I will not summarize the details, for the broader scope of the work is far more interesting. Near the beginning, Nicomachus explains that the study of absolute quantity is arithmetic; that of relative quantity is music; that of size without motion is geometry; and that of size with motion is astronomy. (These are later listed as “the quadrivium” of the liberal arts.) Nicomachus thus sees arithmetic as the most fundamental study of the forms that compose our world. Everything quantifiable, shaped, musical, or astronomical is embraced within arithmetical wisdom. That perhaps does not include absolutely everything (for there must also be justice, courage, wisdom, and moderation), but it includes a whopping lot – perhaps everything that does not fall within the scope of the purest philosophy.

It would be wrong to dismiss Nicomachus’s neoplatonism as the mere enthusiasm of an ancient thinker, as recently I read about a recent book by a physicist who claims that the universe is a mathematical structure. Again, it is not that mathematics can provide useful models for the real world; it is rather that the models are the real world. We might initially object that the world is not pure quantity, but has rough edges and dirty smells and loud crashes. But all of these can, in principle, be modeled as well; there is nothing physical without form, and no such form that cannot be mathematicized. So Nicomachus’s dream is alive and well.