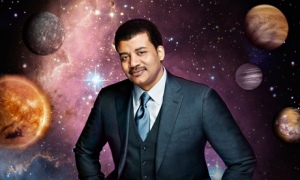 A recent post on the internet has outed Neil deGrasse Tyson (or “NdGT,” as he’s been dubbed by the blogosphere) as a philistine in matters of philosophy. True enough: as charismatic as he is, and as beneficial as his public service has been in bringing the wonders of modern science to a big audience, he does appear to be one of those scientists who imperiously dismiss philosophy as a pointless endeavor without appearing to have any clear idea of what philosophy actually is.

(For background, the relevant discussion comes up between minutes 20 and 24 in the Nerdist interview between NdGT and Chris Hardwick. Now, in defense of the Nerdist, the interview is meant only as light entertainment, and it just happened to wander into a dead-end topic. Arguably, they aren’t talking as much about real philosophy as they are talking about pointless verbal activity. But it is also true that the distinction seems lost on all involved – and hence the fitting charge of philistinism.)

I heartily applaud NdGT’s general efforts at popularizing science. My family and I have watched the entire Cosmos series, and while I think the older series had the distinct advantage of Carl Sagan’s masterful prose, this newer series has its own kind of charm (and much better effects). I confess that early on I bristled at the show’s dumbed-down and misleading accounts of the history of science. (The Renaissance Mathematicus cheerfully dishes up the necessary criticisms and correctives on Giordano Bruno and on Robert Hooke.) But after some reflection I realized that the producers put these segments in simplistic cartoon form for good reason: namely, to advertise up front that they were providing only a cartoon version of history. And if the series’ objective is to get kids interested in science, then maybe it’s okay to sacrifice truth for the sake of a good story. So far as that goes, the scientific accounts they tell are also oversimplified, and that’s okay too. First get the kids interested, and let the details get sorted out later. As somebody once said, teaching is strategic lying. If you tell a full and accurate story up front, you’ll only have an audience that didn’t need to be reached in the first place.

So: good on you, NdGT (and producers of Cosmos), and I hope many kids feel wonder for nature as a result of your efforts. But one also wonders whether these laudable ends might be achieved without ignorantly dismissing other ways of understanding the fascinating and wonderful elements of human experience.

The imperious dismissal of philosophy is nothing new or rare, unfortunately. Stephen Hawking and Lawrence Krauss are recent masters of the dubious genre, and Richard Feynman was nothing if not engagingly caustic on the subject, and there are probably billions and billions of others (more or less). But here I would drawn attention to some more surprising members of the philosophical philistines club: Ludwig Wittgenstein, Friedrich Nietzsche, John Locke, and Rene Descartes. Each of these geniuses had distinctive visions of knowledge they wished to promote, and each had little or no interest in being fair to their philosophical predecessors or their recalcitrant contemporaries. Each casually dismissed their “enemies” with the accusation that they had been corrupted too deeply by stale philosophies to be able to see what was plainly evident to those with proper vision. We might rise to their defense by saying “Well, at least these philosophers actually knew what philosophy is – unlike those other philistines!” and the point is taken. Nevertheless, each of these men were in this respect careless scholars of the discipline. They were, in this specialized sense, philosophical philistines, and more than a little “damned proud” of it. Like the aforementioned scientists, they see philosophy – other people’s philosophy – only as obstacles to progress.

The defense of philosophical philistinism is that we don’t get an understanding of the truth by looking backward into history. (Unless we want historical truth, I guess.) Nor does the scientist or the philosophical genius make progress by looking sideways to contemporaries’ views. The operative advice is instead: damn the other views and sail onward! Ignore the cavils and accusations of not being fair, and let your results do the talking. Scores of well-considered philosophical objections were raised against Copernicus, Galileo, Boyle, Newton, Einstein, etc., but they are known only to the overly-curious today. The philosophers I listed earlier are regarded as some of the greatest minds ever, and studying their thought is a far more sizeable occupation than the study of well-placed historical objections to their thought. What this all suggests is that intellectual innovation requires oblivious, unfair dismissal of arguments to the contrary.

Okay; that last paragraph was meant as a spirited defense of philistinism in the context of genius. But of course I do not think that context extends to the whole domain of intellectual work. Geniuses henceforth have my permission to go ahead and concoct new theories without concerning themselves over reasoned philosophical objections (and I am sure they are relieved to hear this.) But there also needs to be a “clean up” crew: scholars who will patiently explore the arguments, objections, alternatives, counter-examples, and ideas never taken up. These scholars will not innovate (except in the sense of providing new and better understanding of what has already happened, or may be happening – which counts). But they will provide a more rounded and judicious understanding for the rest of us. They can provide the context and reflection that the genius cannot. The genius throws us new content, and the scholar fashions it over time into new understanding – which provides the new occasion for the next genius. It’s a symbiotic relationship.

We should recognize that knowledge is not merely a matter of discovering new facts and coming up with better theories. We also seek an understanding of these discoveries and inventions, and human understanding (for that’s the kind we are stuck with) requires more than the pure and unadorned truth. We need stories, variations in emphasis, nuance, contexts, and “what if?” scenarios. It also doesn’t hurt to speculate over meaning, significance, and possible ramifications. The difference between the naked truth and understanding is akin to the difference between Wikipedia – which, in science and math, is generally accurate to a tittle – and Britannica, which offers magisterial guidance, selection, and evaluation in explanations we can understand. If you want the up-to-date facts, there certainly is no beating Wikipedia. But if you seek understanding in a human format, particularly of historical development and philosophical significance, then those leather-bound volumes are a better place to start. This is not a contest, of course. We can have both, and we need both: the fast and shiny information, and the slow and rich understanding.

This is where NdGT, in his role as popularizer, has let us down with his casual expression of philosophical philistinism. He is supposed to be a member of the clean up crew, at least in Cosmos and his public lectures and interviews, where he is not providing genius-caliber innovation. We can even forgive the sloppy history of his show, if it helps in fostering initial enthusiasm. But when those who aim to provide understanding fall into disciplinary philistinism, and exclude other scholarly disciplines, they are betraying their own cause, and they end up providing not understanding, but blinkered dogmatism.

Curious about the ways humans use their minds and hearts to distract themselves from the meaninglessness of life.
View all posts by Huenemann →
This entry was posted in Items of the academy / learning. Bookmark the permalink.

13 Responses to On Neil deGrasse Tyson and philosophical philistinism