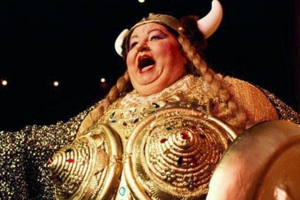 I have long believed that I should love opera. I’m a great fan of “classical” music (a fairly meaningless term, as it encompasses way too much), and view its existence as one of the primary pieces of evidence for believing life is not meaningless. One of the greatest experiences of my life was several years ago when I had the chance to participate in a special seminar on Beethoven’s string quartets. The class incorporated lecturers from various disciplines, and featured a visiting musicologist who knew everything there is to know about those quartets. Accompanying the class was our resident string quartet’s performance of the entire cycle. On successive evenings I was transported into a heavenly region of the soul, one that said everything that can be said about being an embodied mortal with intimations of eternity.

With all that passion, it seems I should love opera. My friends all told me so. But I have tried and tried, only to find it tiresome. The music, of course, is occasionally beautiful – but the drama is so slow, so uneventful, that I have felt the truth of what Mark Twain once recorded:

“I have attended operas, whenever I could not help it, for fourteen years now; I am sure I know of no agony comparable to the listening to an unfamiliar opera. I am enchanted with the airs of “Travatore” and other old operas which the hand-organ and music-box have made entirely familiar to my ear. I am carried away with delightful enthusiasm when they are sung at the opera. But, oh, how far between they are! And what long, arid, heartbreaking and headaching “between-times” of that sort of intense but incoherent noise which always so reminds me of the time the orphan asylum burned down.”

So I was prepared to mark down “opera” as one of those things I just was not engineered to appreciate.

But this week I have subjected myself to Wagner’s Ring cycle – and behold! A breakthrough! I have discovered the key I needed to unlock the secret. I’ll share it here now, for anyone who is in the same position. The key is this: don’t watch opera as drama, in the way you’d watch a play or a film; listen to it as music – with a side accompaniment of a story, which only aims to offer some general themes for reflection. Put the music first, and maintain only a dim awareness of the plot.

I’m not quite through the cycle – Götterdämmuring lies before me – but I am savoring each moment, anticipating what is to come, replaying themes and ideas in my mind. Paradoxically, by paying minimal attention to the story, I am now fascinated by it. But I think it was the music that opened the door for me. It’s too early to say how much this new-found enthusiasm will translate to other operas, but I’m expecting it will. But even if I’ve only learned to appreciate The Ring, I’m glad for it.

Curious about the ways humans use their minds and hearts to distract themselves from the meaninglessness of life.
View all posts by Huenemann →
This entry was posted in Music, This & that in the life of CH. Bookmark the permalink.

2 Responses to On opera